Skip to content
MUMBAI: Google is looking to acquire a minority stake in SoftBank-backed online insurance platform PolicyBazaar as part of its goal to invest $10 billion in India over the next five to seven years, according to people close to the development. Google is keen on acquiring about 10% of PolicyBazaar and could invest about $150 million, they said. SoftBank, which holds a 15% stake in Policybazaar, may make a partial exit, they said.

“Google is looking at the deal as it wants to increase its presence in the Indian digital market,” said one of them, adding that “the valuation and the stake will depend on the last investment rounds”.

SoftBank and Google didn’t respond to queries. A person close to Google denied that any deal was in the works. PolicyBazaar declined to comment.

Alphabet Inc-owned Google announced its India investment plan last month. Chief executive officer Sundar Pichai told ET that the company was “looking forward to working with Indian businesses of all sizes”. Google announced its first investment shortly thereafter – $4.5 billion in Mukesh Ambani-owned Jio Platforms, joining Facebook and others. The company is looking at four-five more deals in the Indian technology startup space, said one of the persons cited above. 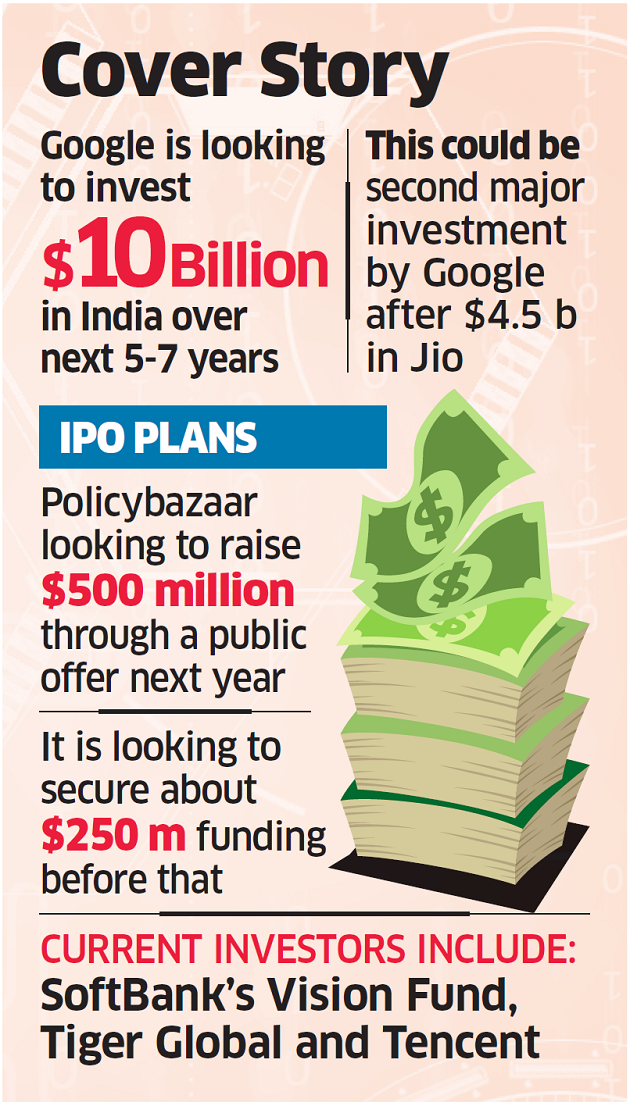 Talk of the possible stake acquisition comes as Policybazaar aims to raise funds through an initial public offer next year. The company has said that it’s looking to secure about $250 million in funding before that. The unicorn is planning to raise the funds at “a valuation north of $3.5 billion”, before a September 2021 IPO, PolicyBazaar cofounder Yashish Dahiya told Bloomberg News in July.

The last investment by SoftBank in Etechaces Marketing and Consulting, the Policybazaar holding company, valued the company at $1.5 billion and took the total stake held by it to 15%. The $130 million investment was made in July. Policybazaar counts SoftBank’s Vision fund, Tiger Global and Tencent amongst its investors. The company could become India’s first digital company to go public through an Indian or US capital market listing as per media reports.

Just a vacation OR…: speculation around Doval’s 5-day visit to Darjeeling