Skip to content
Ajay Devgn enjoys being behind the camera and is taking his passion ahead with his next movie too. The actor will call the shots for his upcoming film ‘Bholaa’, co-starring Tabu. This high-octane, emotional drama will be Ajay’s fourth directorial venture after ‘U, Me Aur Hum’, ‘Shivaay’ and ‘Runway 34’. Interestingly, when this film was announced by Ajay Devgn in April, it was helmed by Dharmendra Sharma, who is Devgn’s cousin. However, it seems like Ajay has taken charge of this entertainer now. 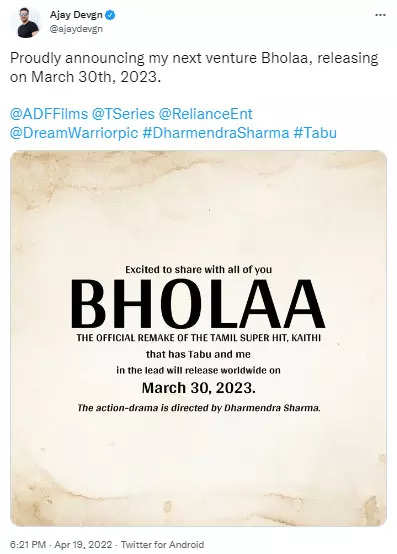 When asked about getting behind the camera soon after the April release of ‘Runway 34’, Devgn had quipped, “Well, the preparation was done earlier on. It was just a question of getting behind the camera again and saying the three magic words-Lights, camera, action!” ‘Bholaa’ is the Hindi adaptation of Tamil blockbuster movie ‘Kaithi’. Ajay Devgn is set to wrap the principal photography of ‘Bholaa’ by August 20. The film is slated to hit the big screen on March 30, 2023.

Etimes had informed you that Ajay Devgn will be busy for three months and ‘Bholaa’ is one of the projects that will keep him occupied. He has ‘Drishyam 2’, ‘Maidaan’ and ‘Thank God’ in the pipeline.