Skip to content
Ranbir Kapoor and Alia Bhatt are one of the most adored couples in Bollywood. The lovebirds are often seen bonding with each other’s families. Neetu often comments on Alia and her sister Shaheen Bhatt’s post.

Recently, Shaheen shared a picture of herself on Instagram. In this picture, she is seen posing for a selfie in a cool hoodie. She opted for minimal makeup and looked cute in the picture. The post was captioned as, ”Put on some lipstick and pull yourself together.”

Check out their reactions here: 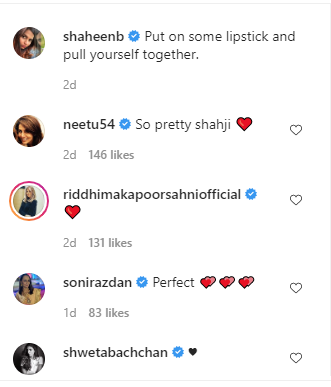 Meanwhile, on the work front, Ranbir and Alia will be seen next in Ayan Mukerji’s ‘Brahmastra‘. There are reports doing the rounds that they will resume shoot from October at a city studio. The film also stars Amitabh Bachchan, Mouni Roy, Akkineni Nagarjuna, Dimple Kapadia. Shah Rukh Khan will be seen in a cameo. Alia also has Sanjay Leela Bhansali’s ‘Gangubai Kathiawadi’ in the pipeline. She is also a part of Karan Johar’s multi-starrer film Takht’.

India vs England: Baz and the red-ball revolution | Cricket News – Times of India