Skip to content
As the investigation of Sushant Singh Rajput’s death case continues with new twists and turns, fans of the late actor stood in solidarity by trending #Warriors4SSR over social media.

Shweta captioned the post, “We will get justice… we will find the truth!! 🙏#warriors4ssr #justiceforsushantsinghrajput #godiswithus”

Ankita wrote, “Believe you both are together ❤️ #warriors4ssr”

And here’s what Kangana’s team tweeted:

Anyone who is being harassed or bullied can make a small video and express his/her plight, thanks to these heros wh… https://t.co/CYINrX5yKA 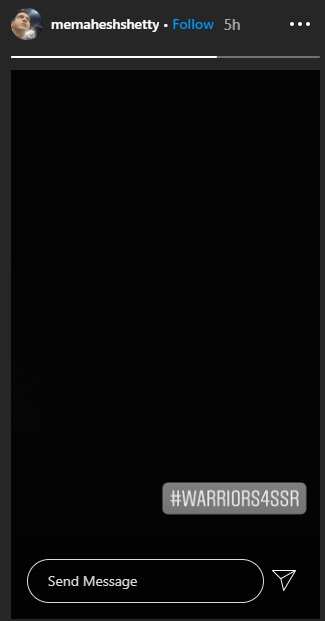 Meanwhile, today, ED has interrogated the ‘Jalebi’ actress for 8-long hours along with her father, brother, SSR’s former business manager Shruti Modi and a CA. According to ANI, ED has also asked Sushant’s friend Siddharth Pithani to appear before the agency on 8th August.

Also, after the Central Bureau of Investigation (CBI) received a request from the Central government to probe the death of SSR, the agency has filed an FIR in the case on Thursday.